Born and raised in downtown Chicago, James D. Letchinger admired skyscrapers and high-rises from a young age. “I watched the city get built,” he said. “I was very close with my father. We would drive around the city, and every time there was a new building going up, he would comment on it, saying ‘those guys build buildings.’ I wanted to be one of those guys.”

Following his graduation from the University of Michigan, he founded a lighting and design studio, which gave him the experience and connections to pursue his dream of being a real estate developer; in 1993, he founded JDL Development. His first project transformed 21 apartments into five unique residential condominiums at 210 E. Walton Street, a 1940’s Benjamin Marshall building. Quickly, he earned a reputation as one of Chicago’s most creative and respected residential developers, focusing on vertical, urban development, where his expertise in entitlement and infill design is second to none.

“He’s so magnetic — people want to buy from him,” Nancy Tassone, Jameson Sotheby’s International Realty, said. “He’s really transformed himself from starting with custom single-family homes and townhomes, to now, where he’s at the top of the luxury condo market.”

His hands-on approach in all JDL’s projects, from inception to completion, has ensured JDL’s survival through several real estate cycles. Today, he’s one of Chicago’s preeminent residential real estate developers, a trend that’s expected to continue, as his two children and his son-in-law have followed in his footsteps, securing his legacy for many years to come.

“He’s competitive; he doesn’t like to lose,” longtime collaborator Jim Plunkard, Hartshorne Plunkard Architecture, said. “He’ll identify a project and do whatever he has to do to get it. It’s his superpower.”

Both his vision and knack for knowing exactly what luxury buyers want were on full display when, in 2019, he delivered No. 9 Walton, the most expensive and exclusive collection of condominiums ever developed in Chicago. Sales at No. 9 Walton dominated headlines around the world and smashed numerous real estate records in Chicago.

Many would have been content to take a step back and relax following that project’s success — but not James. Construction is nearly complete on his newest vertical oasis, One Chicago, a pair of boutique luxury lifestyle buildings in River North that cap out at 75 and 49 stories tall.

“I don’t know where his limits are,” Larry Krueger, Wanxiang America Real Estate Group, said. “I haven’t seen them yet.”

As of this year, JDL has delivered more than 1,900 residential units, with another 2,900 in different stages of development. James credits much of his success to his deep Chicago roots and unyielding love of the city. “Everyone who knows me knows I love Chicago; I think it’s the greatest city on earth,” he said. “I want to leave Chicago a better place than I found it, and I want people to drive around and talk about our buildings. It’s important that they are well-regarded for years to come, because they’re going to be around a lot longer than I will.”

Congratulations, James, on your induction into the Hall of Fame. 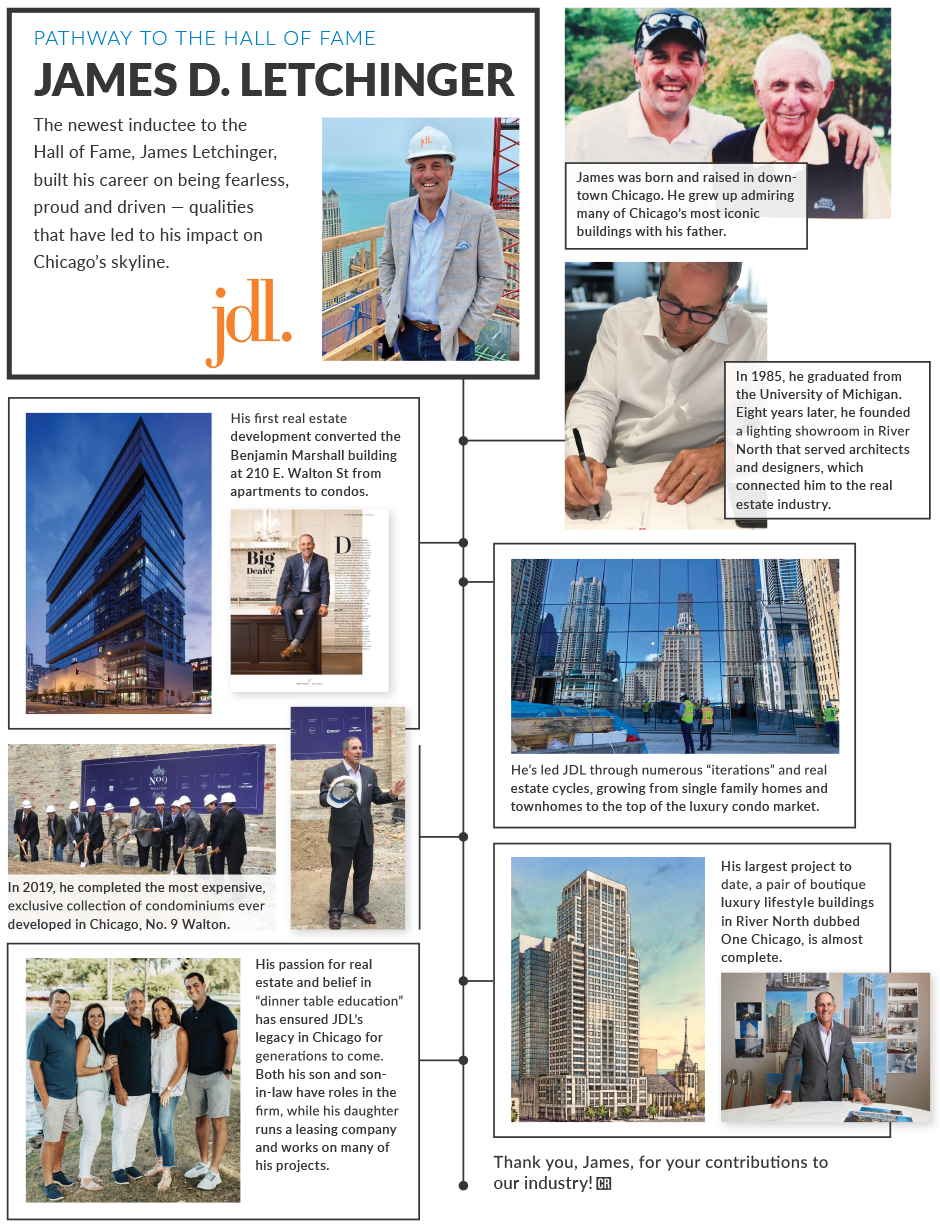 Watch James’ Hall of Fame induction speech and check out his video.