After a long, busy election season, let’s take a look back to see what we’ve accomplished on your behalf.

MAYOR LIGHTFOOT AND THE NEW COUNCIL 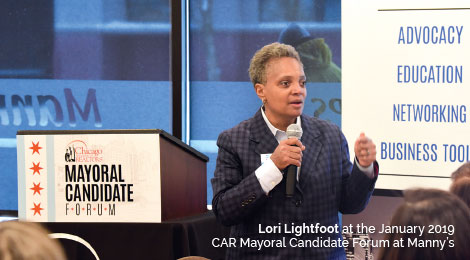 Lori Lightfoot is fully aware of the daunting fiscal and political landscape she will have to navigate as she takes over the reins as our Mayor. Lightfoot’s answers to our survey questions reflected our beliefs in a number of areas; we see great opportunities in working together moving forward and we stand ready to assist her administration in understanding the real estate climate and our importance to the local and regional economy.

A number of progressive voices have been added to a growing caucus in the City Council. Collectively, they’ve been vocal in pushing for higher taxes on entities such as the Chicago Board of Trade and the Chicago Mercantile Exchange. They are also strong proponents of enacting rent control. New chairpersons and committee memberships are a certainty. We monitor every committee and meeting and will keep you fully aware as new legislative agendas are formed.

Our results following the runoff elections were good. We were involved in 12 of the 15 races, and REALTOR®-backed candidates won 10, including, for the first time, the unseating of an incumbent alderman and an open seat victory. REALTOR® advocacy proved to a number of aldermen that if you support REALTORS®, we’ll support you.

THE YEAR SO FAR

FLOOD INSURANCE: CAR past president Mabél Guzmán, @properties, testified to Congress on the 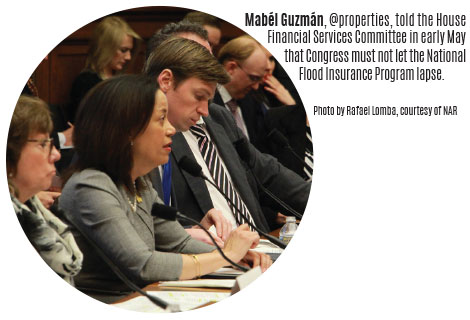 TRANSFER TAX: The Chicago City Council progressive caucus attempted to rush an increase to the real estate transfer tax to fund a range of programs from increased homeless services to lead pipe remediation and Chicago Police and Fire pensions. These efforts were thwarted by REALTOR® advocacy every time.

RENT CONTROL: CAR and Illinois REALTORS® were successful in blocking HB 255, which would have lifted the preemption on rent control in Illinois. The proposal failed to secure the votes needed to get out of the House subcommittee in March, sidelining the issue for now. CAR testified three times in front of the Illinois Senate and also participated in two rent control editorial boards for the Chicago Tribune and The Chicago Sun-Times, in coordination with the Chicagoland Apartment Association. As a result, both papers published editorials in opposition to rent control. We also worked closely with the building trades to gain their critical support and testimony. We are thankful for their partnership and understanding that rent control would not only have a negative impact on property owners, but also the trades. Learn more about
the devastating impacts of rent control at AffordabilityForAll.com.

CONFORMING LOAN LIMITS: Illinois REALTORS® joined with us to move forward a HUD proposal asking for an increase in the conforming loan limit. While the request to HUD was rejected, we continue to work with strategic partners, including MRED, to provide data to substantiate our argument that a number
of high-priced census tracts in the region deserve a higher conforming loan limit.

BUILDING CODE: Chicago REALTORS® worked with the City of Chicago as part of a larger working group to bring forward the first major aggregate modernization changes to the building code in a generation. The new Building Code will more closely align with nationally-accepted model building codes and, as a result, allow for new architectural innovations. Throughout the six-month process, we argued we will never have an affordable city without an affordable building code. Changes to the plumbing and electrical code were excluded this round but expected in the future. The new code will be mandatory by August 1, 2020. 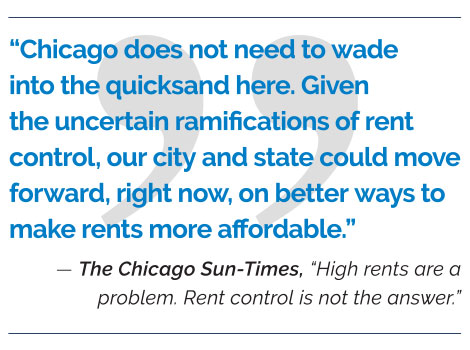 ALSO ON OUR RADAR

We continue to monitor sweeping changes to the Cook County Property Tax Assessment process and multiple proposals on aldermanic prerogative. In addition, we are monitoring efforts to add “alienage” and “covered criminal history” as protected classes under the Fair Housing ordinance.

For more up-to-date summaries of our advocacy work, be sure to join us for our monthly Coffee with the GADs program. If you have questions on any of these matters, feel free to contact Senior Director of Government Affairs Brian Bernardoni. 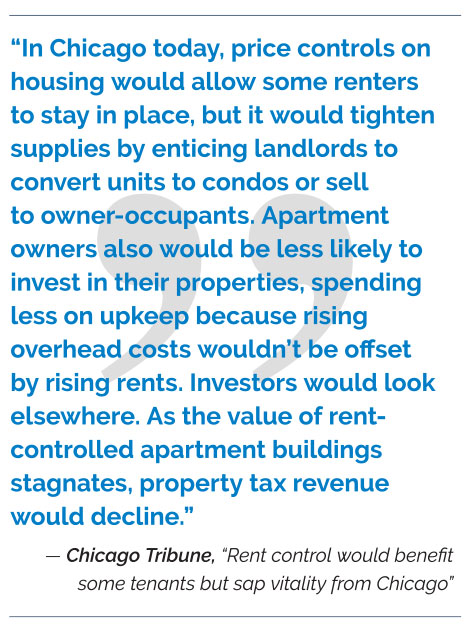