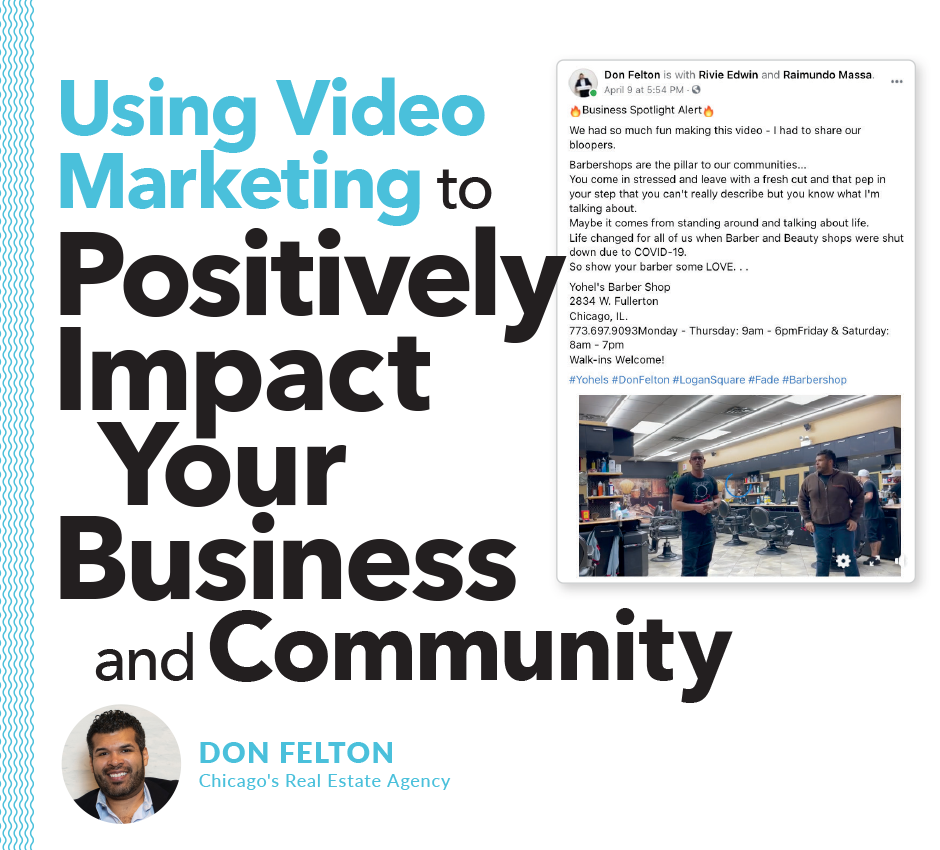 At the beginning of this year, as the COVID-19 pandemic was still impacting many small businesses, Don Felton, Chicago’s Real Estate Agency, began to think about ways he could help. After seeing someone online start a challenge to highlight small businesses in the community, Felton decided to rise up to the task — with his own twist, of course. 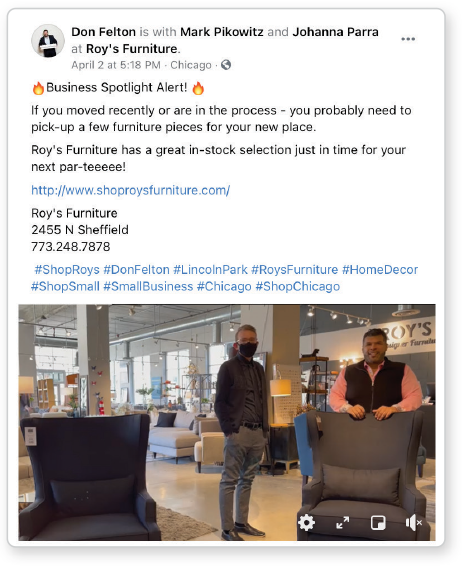 Twitter and TikTok, showcase video marketing at its finest, Felton decided to approach the challenge from the video perspective.

As someone who doesn’t like to talk about himself — which he knows is an imperative part of promoting your business and services in real estate — Felton has found that creating these videos are a great way to create content without the content having to focus on him.

IDENTIFY SMALL BUSINESSES TO PARTNER WITH

Because his real estate business is focused on the west side of the city in neighborhoods like Humboldt Park, North Lawndale and Austin, he began reaching out to business owners he already had a relationship with to see if they would be interested in being spotlighted in a video and on his social media. He views these videos as his seal of approval, so he makes sure to pick wisely. “I definitely support a business that I have experience with their services,” he said.

He also tries to be intentional in his planning; if there’s a commemorative month happening or a holiday coming up, he tries to focus on businesses that fit the bill. For his videos in February, he specifically focused on Black-owned businesses for Black History Month.

Felton notes that it was beneficial to start with people he already had a relationship with, because many business owners were more camera-shy than anticipated; having an established relationship helped convince these companies to get involved.

ENSURE THEY ARE COMFORTABLE ON-CAMERA

For those who are camera shy, he helps get them comfortable with the idea of being on camera. He shares his previous videos so they can get an idea of what he’s going for and get some ideas about what to talk about when the camera is rolling. He also ensures each business owner knows that since this is on video, they can have multiple takes, and he can edit the video to everyone’s liking. This eases the fear of having to be perfect every time and allows them to loosen up.

Felton aims to keep his videos at a run time between 60 and 90 seconds — just long enough to share who the business owner is, what the business does and how to get in contact with them, but also short and sweet enough to keep the viewer’s attention.

USE THE TOOLS YOU HAVE ON HAND

When it comes to equipment, you don’t have to get super fancy. Felton started with just the tools he already had on hand. He uses his iPhone to shoot the videos and edits them on his Mac using iMovie, which he’s found to be a user-friendly software for newbies. Bonus: he already had access to the software — no need to spend additional money!

Once the videos are edited and complete, he shares them to his social media profiles, including Instagram, YouTube, Facebook and Google, and tags the businesses when possible. He also shares it with the business that is featured, who can then use these videos for their own promotion and marketing. For example, a beautician took his video, cut it down and turned it into their own video, so it was a two for one deal.

Felton notes that it’s important to be intentional about when you post. He calls his video series his “Friday video spotlight,” and aims to post a video every Friday. Pick a day and commit to posting every week on that day, so your followers know when to expect new content.

Moving forward, he plans to focus on businesses that will impact his clients, like home inspectors and repair companies, and he also plans to highlight restaurants as regulations loosen, as so many of them were heavily impacted by the pandemic.

Felton has seen great success come from this project. “It gets people talking,” he said, and he’s heard from his small business partners that these videos have helped to grow their reach.

So, are you ready to take on the challenge of promoting small businesses? Use the tools already at your disposal, focus on businesses you believe in and be intentional about posting and planning — you can easily get started, too!