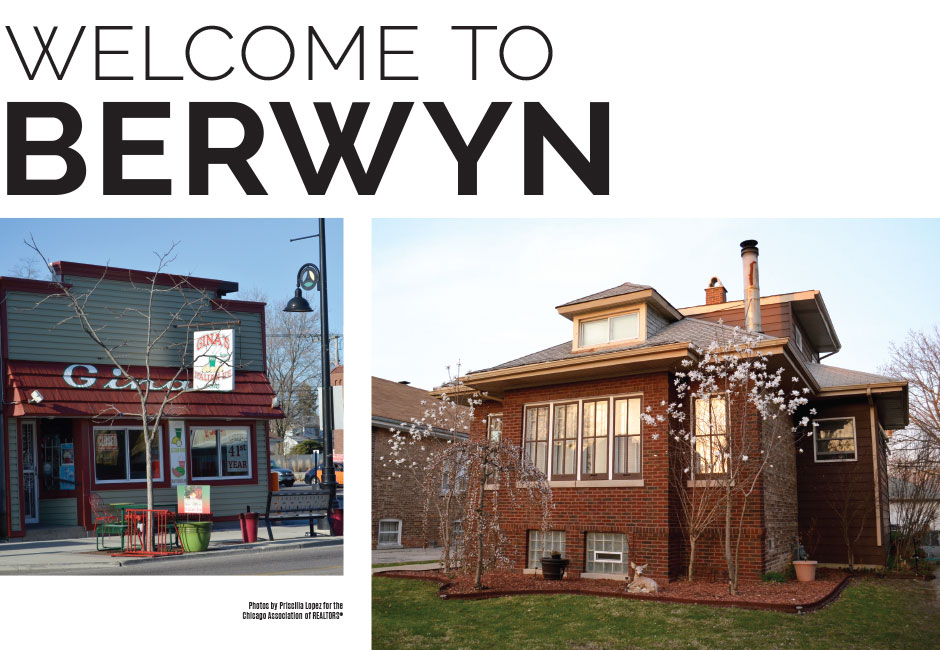 Established in 1908, Berwyn has a rich history. What was once land of Native American trails and an anticipated home for the elite and wealthy, became a haven for middle-class communities. In the early 1920s, Czechs migrated to Berwyn and Cicero from the Pilsen area, then eventually came other groups, including Italians and Hispanics, adding to the neighborhood’s unique blend of cultures.

Today, Berwyn looks less like a suburb and more like a trendy Chicago neighborhood. A wave of artists, young professionals, families, LGBTQ advocates and entrepreneurs are moving in to this western community that prides itself on being the “city of homes,” called such due to the thousands of homes built with distinct architectural styles. And with a location just eight miles west of the Loop, Berwyn is using its proximity to offer a vibrant and affordable alternative to city living without losing the “city feeling.”

A MIX OF COMMUNITIES

There are four business districts in Berwyn, each offering a different experience to its residents and visitors.

A few blocks from the I-290 expressway, this is where Berwyn is the closest to Chicago. Berwyn, Cicero and Oak Park joined forces many years ago on Roosevelt Rd. to create what is now known as The Veltway, a growing destination for nightlife and dining. You’ll find nationally-known live music venues, such as the long-running FitzGerald’s Nightclub and state-of-the-art Wire bar and recording studio, playing everything from country to blues.

FitzGerald’s has been called “One of The Top Ten Concert Venues in Chicago,” by WXRT-FM Chicago, and The New York Times called it “A Musical Gem.” It also makes a great sports bar. During big games in the warmer months it sets up stadium seating on its front patio with a giant projector screen to hold viewing parties. Throughout the year, it also hosts several cook-offs attracting visitors from all over the country.

Foodies will also be happy to choose from a diverse array of eateries on the strip, like the Michelin-rated Mediterranean restaurant Autre Monde Cafe, praised for its patio and spirits, “Chicago’s Best of Roosevelt Road” Big Guys Sausage Stand, and popular seasonal spot Gina’s Italian Ice, featured on “Chicago’s Best” for its frozen dessert.

If you’re in the market for goods, The Craft & Vintage Market is open every third Saturday of the month between 10 AM and 4 PM at the Friendly Coffee Lounge, one of Berwyn’s top coffee shops. While an eclectic mix of retail and restaurants dominate Berwyn’s Main Street, it was once known as the center of Czech life and culture in the Chicago area. Some traces of its Bohemian roots are still apparent, such as The Chicagoland Czech American Cultural Center and Vesecky’s Bakery on Cermak Rd. Going down Main Street during any themed holiday, one store will catch your eye due to its heavy door traffic: Old Fashioned Candies, popular for offering “Chicago’s Best Sweet Treats” and chocolate covered strawberries.

The strip is also home to the unusual tourist destination: the 13,500-square foot World’s Largest Laundromat, honored by the Guinness Book of World Records. The father-and-sons’ business is also famous for its award-winning green initiatives, like a 36-panel solar thermal system—one of the largest installations in the state.

And, Berwyn’s Cermak Plaza, off the Harlem Ave. and Cermak Rd. intersection, was a filming location for the iconic Wayne’s World comedy.

With Berwyn’s award-winning corporation and business incentives, there’s been rapid development in Berwyn near the North Riverside border. Popular national chains and emerging chains want a piece of Main Street. Starbucks, Chipotle Mexican Grill and Five Guys Burgers and Fries moved in recently, with others including Panera Bread opening soon.

But the main attraction on Main Street is in line with the heart of the town: small businesses. La Lupita Restaurant competes with some of the best tacos in town, but its Pozole is considered the best in the city. WGN-TV’s “Chicago’s Best” named La Lupita “Chicago’s Best Mexican Restaurant.” And, did we mention it offers authentic tortillas made in-house? Situated along the Metra-BNSF Railway corridor, this area is one of Berwyn’s most quaint and walkable business districts. That’s why Berwyn’s Oktoberfest is one of the western suburbs’ biggest parties of the year in September. Its family-friendly “cruise nights” also attract many residents and visitors alike.

The Depot District offers a fun mix of independent shops operated by artists and collectors, such as Reel Art Collectibles, a shop for comic books, vintage movie posters and toys. Dine at Oliver’s Prime Cuts & Fresh Seafood for the perfect date night and then grab drinks at the Olive or Twist Martini Bar next door. Lavergne’s Tavern is the place to visit for “Berwyn’s Best” cucumber mojito and “Chicago’s Best Italian Beef.”

The Depot District also offers great daytime attractions. If you like to start your days with caffeine and work up a sweat, then Lunges ’n Lattes is the place for you. Its highly-trained baristas also craft healthy juices, smoothies and “mom-approved” snacks for the whole family. If you’re looking for more of a mom-and-pop spot, Mission House Café is known for its cozy feel and comfort food.

Yes, a piece of the 300-mile U.S. Route 66 runs through Berwyn. Ogden Ave., designed to highlight the nobility of the country’s automotive industry at the time, still celebrates car culture today with the Berwyn Route 66 Gift Shop, scenic exhibits and the annual Berwyn Route 66 Car Show, which attracts more than 30,000 visitors. You can get a free Route 66 passport at the gift shop, stop by the informational kiosk for Route 66 Berwyn information, or check out the four exhibits to learn more about Berwyn’s history on “The Mother Road.”

Another must-see is Berwyn’s Toys & Trains, a family-owned specialty toy and hobby shop. The building’s vibrant, classic aluminum storefront is on theme with Route 66’s architectural heritage, but its stock of 20,000 vintage toy brands and model trains make it one of a kind.

Another site worth visiting is the WWI Memorial, built in 1919 by the Berwyn Women’s Club to honor the Berwyn residents lost in WWI. The site was designated as a historic landmark in 2011.

HOW TO GET AROUND

Berwyn offers easy access to both downtown and the far west suburbs, due to its location between the I-290 and I-55 expressways.

Berwyn is very walkable, with an average Walk Score of 75. Most errands can be accomplished on foot or via their bicycle paths.

Looking to ditch the car altogether? The downtown Depot District includes the LaVergne, Berwyn and Harlem Metra stations, ideal for traveling to counties throughout the Chicagoland area. CTA’s Blue Line is four blocks north of The Veltway’s Roosevelt Rd., and the Pink Line is less than a mile east of Berwyn’s city limits on Cermak Rd. There are also several PACE bus routes available throughout the area.

Berwyn is renowned for housing the most significant stock of Chicago-style bungalows in the nation. The city of homes was an inspiration for Bungalow Appreciation Week in Illinois and has been mentioned in the National Register of Historic Places for its Central Berwyn Bungalow Historic District.

Even after being recognized for its rich history of residential homes, Berwyn manages to maintain some of the most affordable housing available in the Chicagoland area. In 2017, the median home sales price was around $200,000.

It’s tree-lined residential streets are as unique as its neighborhoods. With more than 26,000 single-family homes in a 3.9 square mile, the diverse community has housing stock for most budgets, with many larger homes on the south side and many smaller, bungalow-type homes on the north side. Buyers can also find stately Victorian, American Foursquare, English Tudor and Prairie School housing styles. There are also several multi-unit apartment complexes full of 1900s character.

The National Register of Historic Places lists two Berwyn homes for being perfect models of the styles they embody: the Silhan House, an Art Moderne home designed and built by Robert Silhan, inspired by the buildings he saw at the Century of Progress World’s Fair held 1933–34, and Arthur Dunham House, a Prairie School-style home owned by Arthur Dunham, designed in 1907 by architectural firm Tallmadge & Watson, notable for its horizontal lines, lack of ornamental details and bands of windows.

Berwyn’s bungalows are like Chicago-style bungalows, just on a bigger lot. Built generally between the 1920s and 1930s, builders gravitated towards this style because of its affordability, durability and aesthetic.

The workman’s cottage can be bigger than typical cottages; most, however, are one-and-a-half stories with a pointed roof. Some are frame houses and others are brick, but most were built around the 1890s with a floor plan like the Berwyn bungalow.

The foursquare uniquely maximizes its space and is known for simplicity. Built around the 1910s, this “square” style typically has a bigger lot with an ample front lawn, large first floor and same-size full second story.

Popular due to its opulence and common materials, the Queen Anne’s in Berwyn are full of detail. Built through the 1890s and 1910s, they commonly feature wood siding, wrap-around porches, turrets, towers and other ornamental details, showcasing the era’s extravagance.

Seen as an ideal home for soldiers to raise a family after returning from WWII, the Tudor Revival tends to be on a smaller lot. Despite its size, the homes have detailed trademarks, like steep pitched roofs intersecting gabbled roofs

Berwyn, with its mixed of housing and vibrant community life, has a lot to offer Chicagoland residents and visitors alike.