As REALTORS®, we know how important homes and commercial properties are to the backbone of our communities. But we also know there is much more that goes into making our communities healthy and vibrant places to live, work and play.

This is why over the last few years we’ve funded placemaking projects throughout the city to enhance our neighborhoods and strengthen our relationship with community stakeholders.

Early this fall, we unveiled our latest efforts: the creation of two brand-new murals funded by National Association of REALTORS®’ grants. Here’s an exclusive look at these new murals, their inspirations and their legacies. 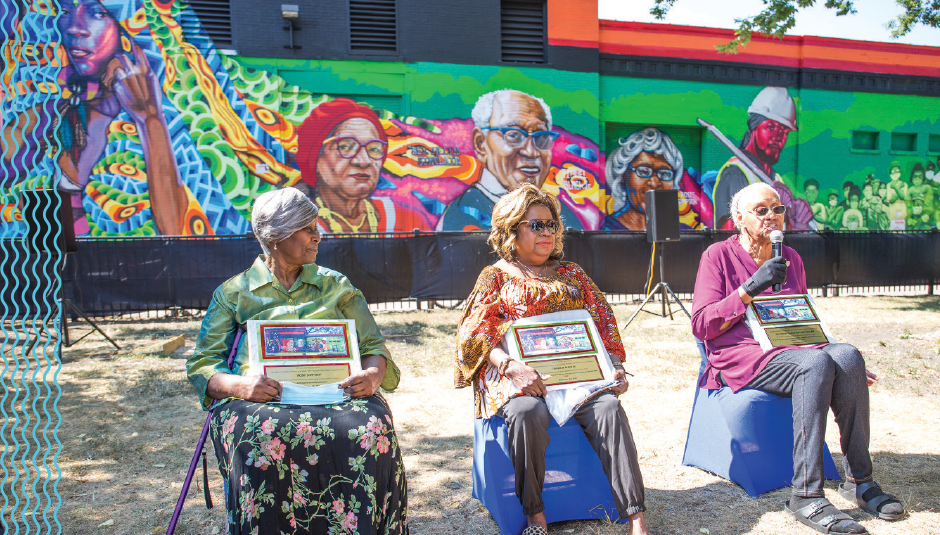 Jessie “Ma” Houston Park in Kenwood is no stranger to impactful artwork. In 1994, the “Feed Your Children the Truth” mural was unveiled, commemorating the life of the park’s namesake, Jessie “Ma” Houston, a minister and activist who worked to improve incarcerated persons’ lives through Operation PUSH (now the Rainbow PUSH Coalition).

The new “Living Legacies” mural, funded by CAR and the Southeast Chicago Commission, honors unsung community and civil rights activists, all of whom were hand-picked by the park’s Advisory Council: Timuel Black Jr., Rosie Simpson and Reverend Helen Sinclai. Each is honored as having an outsized influence in Black and minority communities around Chicago.

World-renowned street artist Rahmaan “Statik” Barnes created this new mural, which can be viewed at the corner of 50th Street and Cottage Grove Avenue. He may be a familiar name to those of you familiar with our previous placemaking projects, as he is also responsible for our 2019 project in Chatham: a mural depicting poet Gwendolyn Brooks.

ANDERSONVILLE: LIFE AT THE INTERSECTIONS MURAL 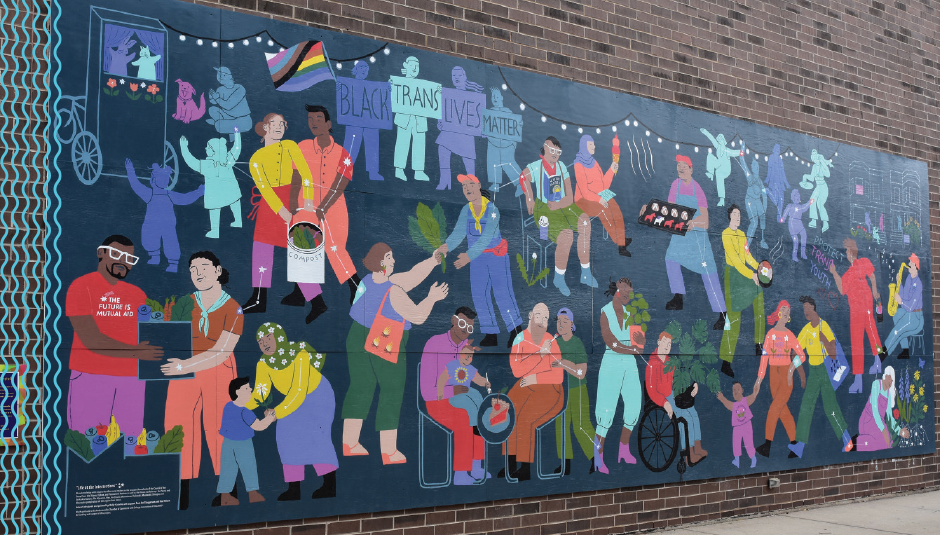 Andersonville, a community within Edgewater, is home to residents of many different backgrounds, ethnicities and sexual orientations. “Life at the Intersections,” a new mural on the south wall of The Clark (5346 N. Clark Street), aims to reflect the neighborhood’s diversity.

Artist Molly Costello interviewed 77 local residents and business owners as inspiration for the piece, which highlights the neighborhood’s LGBTQIA+ and activist legacy, in hopes of inspiring reflection on alternative community safety, wellness, mutual support and care.

“Their honesty about the area and hopes for the future were poured into these visuals,” Costello said.

The location of the piece is notable: The Clark building, which formerly housed a Swedish bakery, is a neighborhood landmark, acting as a hub for community activity. The adjacent alley and courtyard hosts many local events and holiday parades, making it a prime location for our project.

Placemaking: Where We’ve Been & Where We’re Going

We have a number of placemaking projects at different stages of completion. 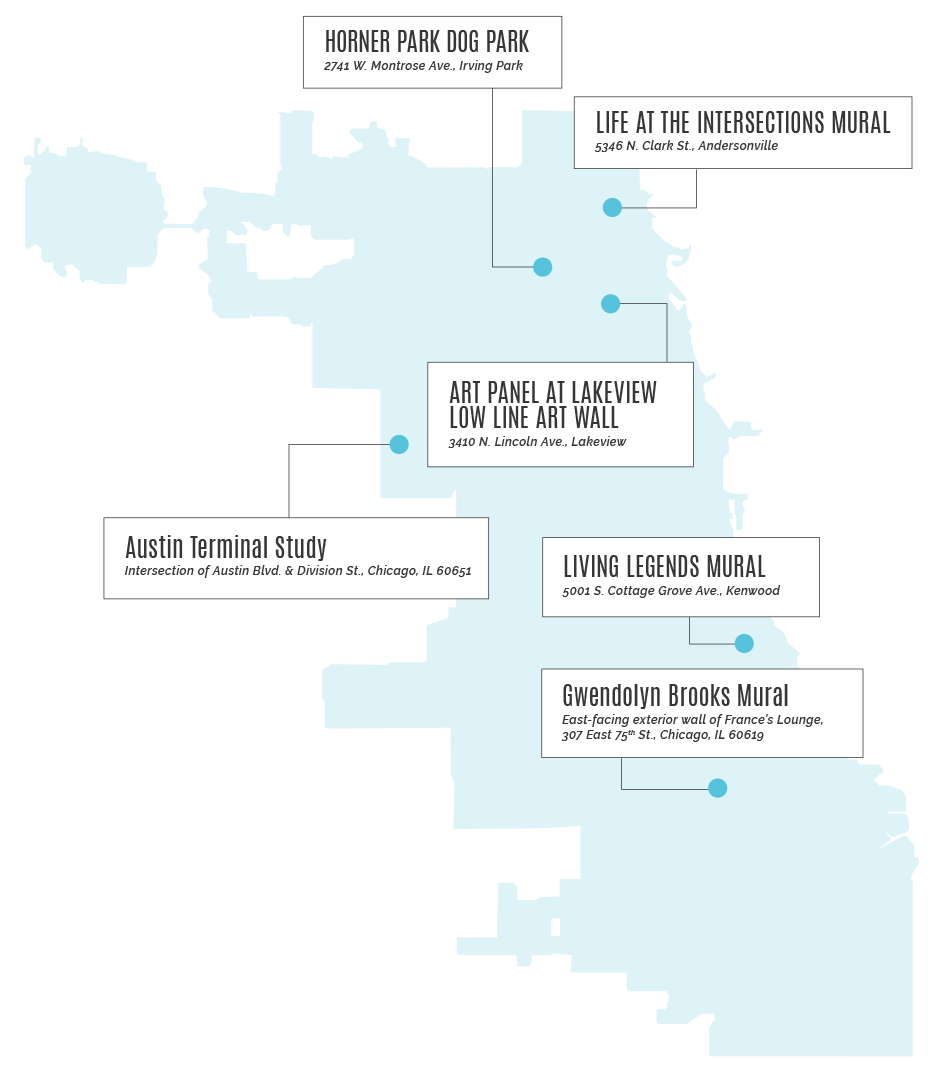 The Gwendolyn Brooks Mural highlights the work of the poet herself, who was a Chatham native. The mural serves as a legacy item in Chatham and a physical pledge of CAR’s support of our vibrant south side communities. This mural was completed by artist Rahmaan “Statik” Barnes, who also completed the Living Legends Mural in Kenwood.

Horner Park Dog Park provides a place for Irving Park dog owners to meet and congregate at the largest “grass” dog park in Chicago (which is actually made of turf, per Chicago Park District rules). CAR funded the second phase of the dog park, which included paving an entryway, installing a water fountain and water features, and building out a small dog area with benches.

This study was designed to determine usage, engagement and accessibility for the Chicago Transit Authority (CTA) Division Street bus terminal in Austin, while establishing recommendations for capital improvements using a blend of CTA rider volume data going back to 1995, community demographics and the existing blend of nearby residential and commercial real estate. The recommendations included enhancements and upgrades to the terminal as well as walkability and access in the area abutting the station, which were presented to the Chicago Transit Authority.

The Low Line connects Lakeview’s unique sub-districts by reenvisioning the half-mile space beneath the CTA ‘L’ tracks between Southport and Lincoln Avenues as an art destination. Our investment will fund a small art wall along the walkway, which will ultimately play host to rotating art exhibits, creating an outdoor gallery.